Despite the early date of the previously discussed Bellows Homestead, another house in Walpole village may slightly predate this structure. The house on North Main Street today, known simply as the “Historic House” (1761), ranks as the oldest standing structure in Walpole.  Resident Ray Boas tells the story of how the house barely escaped demolition in 1930. When an oil company intended to buy the property for the purpose of constructing a filling station, a number of concerned citizens were stirred to action to save the house. A loan was obtained and the property was purchased with the purpose of making it the headquarters of the newly formed Walpole Historical Society. This plan was successful and in fact the house would display the collections of the WHS until 1948.

This house combines a saltbox in the rear with a gambrel roofline in the front.  The bottom section of the gambrel roof employs an unusual convex, or pulvinated, roofline leading to the eaves, and acts as a covering for the columned front porch. This feature is more commonly tied to the Dutch Colonial, a style rarely seen in New England and more common to the Hudson River Valley of New York state. However, examples of this type which date to the eighteenth century survive today in Woodbury and Essex, Connecticut. Considering that many of Walpole’s early residents migrated up the Connecticut River Valley to New Hampshire and Vermont, these eighteenth century Connecticut structures may have been the inspiration for this early Walpole home, which today serves as a private residence.

This is the third in a series of profiles of significant architecture in Walpole. Many of the buildings described in this series can be found in Frontier Elegance: The Early Architecture of Walpole, New Hampshire 1750 – 1850 by Bill Ranauro.

"Cabinet Work
N I C A N O R   T O W N S L E Y
TAKES this method to inform the publick that he carries on the CABINET MAKING BUSINESS in Walpole Village, about twenty rods west from Gen. Bellows's, where may be had on short notice, and in the newest fashion, Side Boards of different figures; Sofas; Secretaries, welled or plain Desks and Book Cases; inlaid or plain Clock Cases; commode, circular or plain Bureaus; dining tables; Circular Ends of any size; inlaid or plain Card Tables; Framed Chairs of any kind; inlaid or plain Tea Trays; and every other kind of Cabinet Work, which is wanted in the country, for which cash or country produce will be taken in payment.
Walpole, July 22, 1797"


This advertisement was on the front page of The Farmer's Weekly Museum: Newhampfhire and Vermont Journal, published in Walpole on Monday, August 14, 1797.  According to the Aldrich history of Walpole, Walpole As it Was and As It Is (1880), Nicanor Townsley was a resident of Walpole as early as 1785.  "His occupation was that of a 'Jack of all trades'.  He had a small shop which stood just east of his house, where he used to employ a portion of his time in repairing various articles of furniture for the townspeople, which he did very neatly, he being a man of uncommon ingenuity.  From 1795 to 1817 he was town clerk with the exception of 1807.  It was his duty to cry the banns of matrimony before church service, from year to year, and his voice was so peculiar that once heard it was not easily forgotten.  He held some town office every year for more than twenty-five years, and was often chosen one of the selectmen, on account of his good ability and sound discretion." 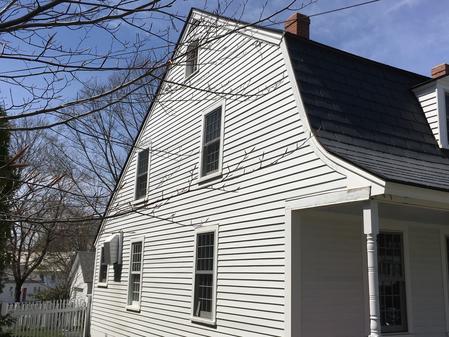 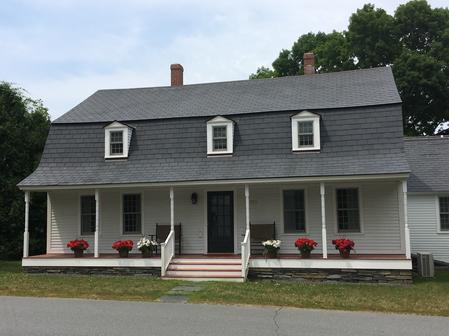 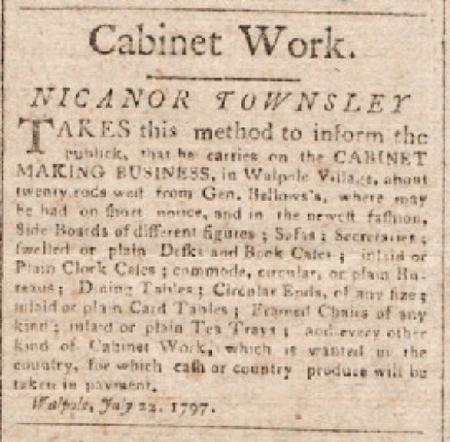 Greetings and welcome to the third installment of the Walpole Historical Society's "Walpole Heritage Museum Comes to You" series.  Every Wednesday we will offer a new step along an architectural tour of Walpole, as well as another story from the history of Walpole - this week from a 1797 Walpole newspaper.

We hope you enjoy this series!  As always, we welcome your thoughts and ideas for other historical topics - just reply to this email.  Recently, an alert reader emailed to ask for information relating to the history of the 10 donated benches on the Common - please let us know what you know!