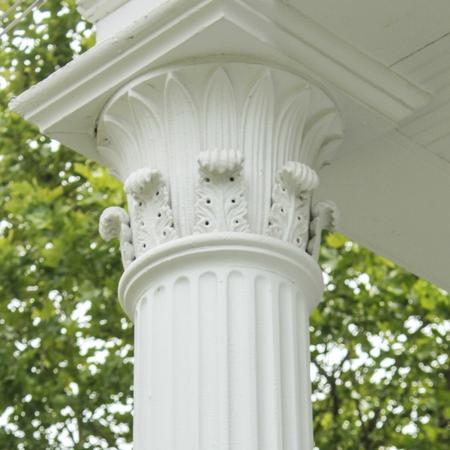 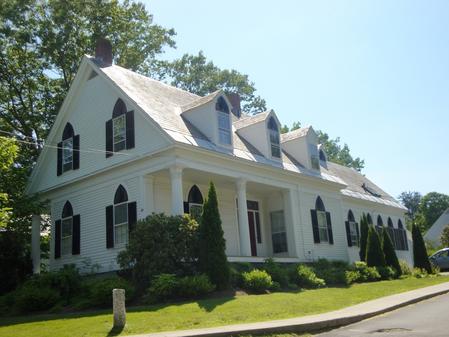 We're back, this time with the final installment of Bill Ranauro's architectural tour of Walpole and a Memorial Day reflection from Walpole Historical Society member Andrew Wilking.  Please keep your thoughts coming by replying to this email.

When Aaron Howland moved from his house on the common, it was to move his family into the new house he was building on Elm Street around the corner. The Howland-Schofield house, as it came to be known, gave a hint of the stylistic changes that were in the wind by the 1840s. Walpole has wonderful examples of houses employing architectural details inspired by the Georgian, Federal, and the Greek Revival styles. In all cases, the architectural handbooks of Asher Benjamin were an important presence in the use of details for these styles.

The Howland-Schofield house (1844) would continue to employ details associated with the Greek Revival, but also introduced features of the newest style to be seen in America, the Gothic Revival. Many considered the Gothic to be a style employed strictly for ecclesiastical structures, but it was soon to be seen on domestic architecture, often in combination with classical details.

Mrs. Lucille Bragg offered testimony as to the reputation of Aaron Howland as a builder almost a century after construction of the house. Upon taking over the property in 1941, Mrs. Bragg said “The fact that the house was built by Aaron Howland for his own family undoubtedly accounted for its superior construction.” Mrs. Bragg was probably referring to the extra thick cellar and exterior walls, which are of brick covered with clapboards. The Greek Revival is represented by the Corinthian order columns of the east and west porticoes, with capitals of the type illustrated in a plate from Benjamin’s American Builder’s Companion, while the Gothic is represented by the pointed-arch louvered tops of the windows and dormers.

There are three dormers on both the east and west side of the steep, slate- covered gable roof. The steepness of the roof line is yet another nod toward the Gothic, since Greek roof lines possess a shallower pitch.

Today the Howland-Schofield house functions as the offices and studio of Florentine Films, the company so well known for its documentary film making under the leadership of founder Ken Burns. The building itself is yet one more example of a transitional, or eclectic- style building in Walpole.

This is the eighth in a series of profiles of significant architecture in Walpole. Many of the buildings described in this series can be found in Frontier Elegance: The Early Architecture of Walpole, New Hampshire 1750 – 1850 by Bill Ranauro.

We learned these names in school, or through reading, and they are part of our memory. These names also belong to a history independent of ourselves. These forenames and surnames are familiar to us because they are common today. Whether they belong to members of our family, to friends, or to strangers, we hear them or see them almost daily. So, these names belong to our past, and specifically to a time when our country came into being, and they are revered.  We think of the people with these names as members, with others, of a special group, our Founding Fathers.

But, there were those living at the birth of our nation who were also Founding Fathers but whose names do not exist in our memory, or in history, nor are they heard or seen today. They are nearly forgotten. But not entirely.

These are the names of residents of Walpole. They are inscribed in stone and stand vigil on our town common. They all fought, and some died, in our Revolutionary War, and almost certainly had families. So, they, too, were Founding Fathers.

These names not only belonged to these Founding Fathers but were as familiar to them as George, Thomas, Benjamin, etc. are to us. They all appear in the one book found in almost every home of that time.

Hezekiah - a king of Judah
Elijah, or Elias In Latin - a prophet during the reign of Arab
Pelatiah - a son of Hananiah, appearing in the first Book of Chronicles
Lemuel - a king and prophet mentioned in the Book of Proverbs
Ephraim - one of the tribes of Israel
Zadock - the High Priest of Israel during the reigns of David and Solomon; included in Handel’s Coronation Anthem

These names, and their origin, give us a glimpse of a different Walpole and a part of the core of its people.