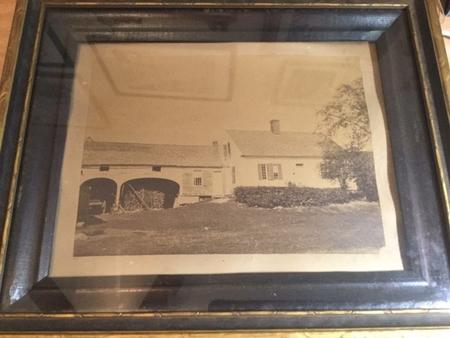 “This is a picture of my old home in Walpole. It must have been taken while my mother was living.  She died in November 1871.  I have reason to think that it was taken before that time by my remembrance as well as the surroundings of the place.  The tree near the house is small as shown in the picture.  The old wagon house is there and there seems to be no tree near it.  There was one long before the wagon house was removed.  That has been gone for years.  The chimney seems to be perfect, and the dried apple on the frame under the wood shed is something they have not had since her death. Mrs. Perry went west soon after my mother’s death and there has been no one there since, who has dried apples in that way.  The hedge in the picture is all there, since it has been broken down for years.  And beside all that I think I have recollections that either my mother or Mrs. Perry gave me the picture.  If that is so it must have been taken before 1871.  It may be imagination, but I have always thought as I have looked at the picture that she was sitting at the window when the picture was taken as shown; that was her old place to be when not around the house.  If so that fixes the date.  The old eaves trough is another thing.
The frame I made myself of door mouldings, which I got at Nims, Whitneys Co. shops; I sawed the pieces evenings and fitted them the best I could with my knife and what I had to do with.  I also framed other pictures in the same way.  The picture was taken by a traveling artist.
Keene, Sept. 28, 1911.                                   L. Wellington."

Imagine my surprise when I read on the back of the picture frame this passage, written on September 28,1911 by a Keene lawyer:

This time we're back with the story of a family artifact, and a reminder of the treasures to be found in our attics and local shops.  Read the story below to find out how Bill Reed was reunited with his history.  Please let us know if you have any family treasures you would like to share!

The Story of a Rediscovered Family Photograph

My neighbor, Peggy Pschirrer, showed me this this photograph she bought in a local antique shop several years ago.  Depicted is a house that stood in the Christian Hollow area of Walpole until it burned to the ground in 1923. 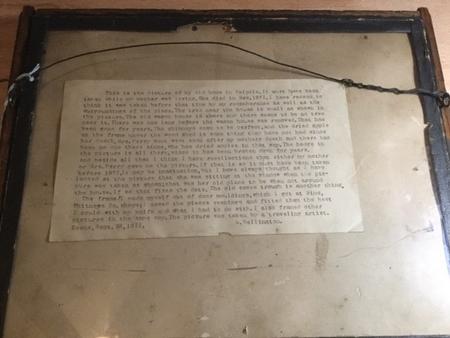