Greetings and welcome to the fifth installment of the Walpole Historical Society's "Walpole Heritage Museum Comes to You" series.  Every Wednesday we will offer a new step along an architectural tour of Walpole, as well as another story from the history of Walpole - this week from (yet) another delightful entry in a 1797 Walpole newspaper. 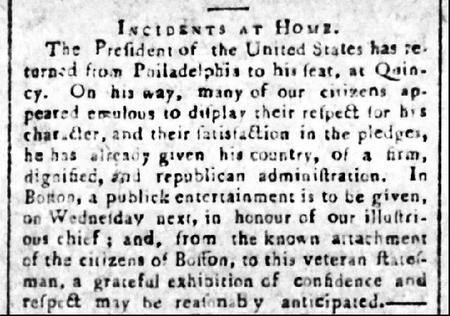 Legend has it that when Walpole resident Louisa May Alcott wrote her children’s novel Under the Lilacs in 1878, she took the setting and inspiration for the story from the magnificent hedge of lilacs that grows along the bottom of Wentworth Road alongside the house known as the Knapp House (1812). Apparently, Louisa May was a frequent visitor to this house during her several years residence in Walpole. Built by Josiah Bellows, II, the grandson of Colonel Bellows, it was designed to be the most beautiful and imposing residence in town. Arguably, Bellows accomplished his goal. The Knapp house furnishes the purest example of the Federal style in Walpole.

Known locally as “Slick Si” because of his ability to talk so persuasively, Josiah Bellows was colorfully described as a “roistering gay blade about town.” The career of Bellows began as the owner and proprietor of a public house, i.e., a tavern.  However, financial troubles forced him to mortgage the house. Considering the position of the Bellows family in the town, this must have been a great embarrassment for Josiah and his family. Perhaps this explains why he moved his family (including an African-American woman named Rachel, presumably a servant) further north to Lancaster, New Hampshire in 1824.

It seems clear that the house was fully intended to express a high degree of style and grace by its occupants.  Even the location was chosen to make the house distinctive. Before the growth of trees obscured the view, one could stand at the upstairs hall window and look down onto the town’s Main Street to view seven other houses of Bellows family ownership. Except for the very bottom part of the road, present day Wentworth Road did not exist in the early nineteenth-century, so, along with another Bellows house directly across the street from it, the house would have stood alone in looking down on the village.

The house is a regionally typical example of a Federal style house, except that it is constructed of brick, a material more commonly associated with the Adam style in the southern part of the United States. In a region where wood was more typical due to its plenitude, this must have made the house stand out just that much more. Architectural historian James Garvin observes that the house possessed a degree of urbanity not commonly seen in country houses. He points out that “brick houses in New Hampshire outside of Portsmouth were rare until at least 1820.” In addition, Garvin attests that “the house shows the strong influence of architect and author Asher Benjamin.” The hip roof has a cornice with guttae blocks and rope molding, details very likely taken from an Asher Benjamin guidebook. The windows are all original (including some panes of glass) with louvered shutters, and have granite lintels with simulated double keystones, a detail similarly found on Samuel McIntire’s Gardner-Pingree house in Salem. Interior details likely taken from Benjamin’s guidebooks include the balustrade, which ends in a spiral, and the columns of the mantelpiece in the parlor, which rest on little balls.

The plan of this house also reflects the Federal style. The chimneys are positioned away from the central portion of the house to the four corners. This arrangement opens up the interior, allowing for a greater utilization of space, and would likely have been considered superior stylistically.

The rectangular portico (below) is supported by twin slender Tuscan columns on either side of a central entrance, and has an entablature with cornice and triglyphs along the frieze. 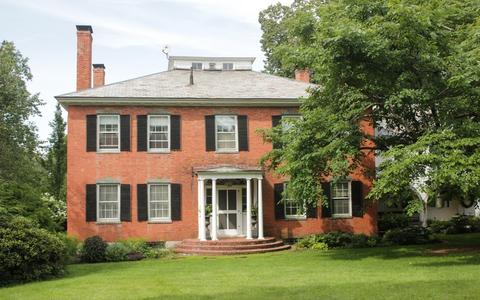 According to America’s Library, Adams was well-known for his extreme political independence, brilliant mind and passionate patriotism.  He was a leader in the Continental Congress and an important diplomatic figure, before becoming America’s first vice president, under Washington.

In the same issue of The Farmer’s Museum, there was considerable discussion about relations with France and England and a lot of international news.  Walpole must have had an educated populace with an interest in national and foreign affairs.

The newspaper, according to History of Cheshire and Sullivan County

More about The Farmer’s Museum to follow in The Walpole Heritage Museum Comes To You series, maybe even a clue to the newspaper’s name! 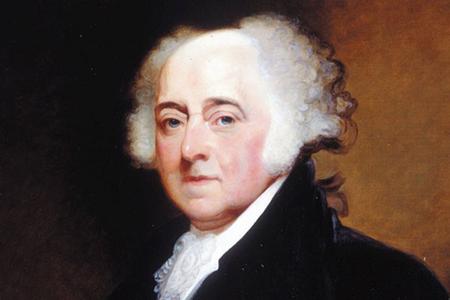 The President of the United States has returned from Philadelphia to his seat, at Quincy. On his way, many of our citizens appeared  emulous  to display their respect for his character, and their satisfaction in the pledges he has already given his country, of a firm, dignified, and republican administration.  In Boston, a publick entertainment is to be given, on Wednesday next, in honor of our illustrious chief; and, from the known attachment of the citizens of Boston, to this veteran statesman, a grateful exhibition of confidence and respect may be reasonably anticipated.

It was John Adams, the second president. He had been president for a little more than five months, but his public approval rating was evidently still high, at least in Walpole. 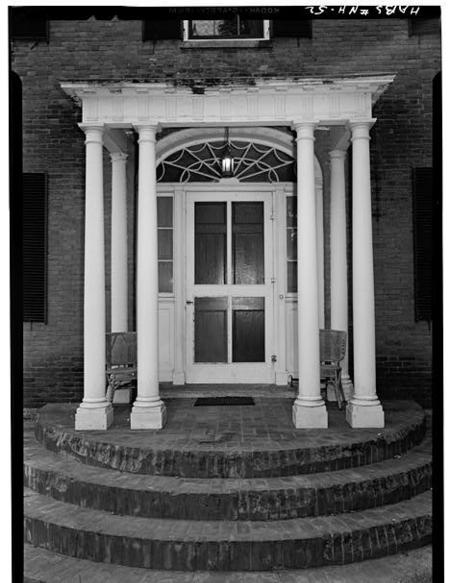 This technique in effect “frames” the door when approached directly from the front.  A single column provides support from the back. The projecting brick steps are elliptical in shape, as is the window above the door with its delicate tracery. The elliptical shape of the portico steps echoes McIntire’s Gardner-Pingree house, though it is the covering portico rather than the steps which utilize this shape. The door is original with three flanking side-lights.

An outstanding interior feature of the Knapp house is the original French Dufour wallpaper, giving the house a refinement which must have been very unusual in a rural house in the early nineteenth century. The wall paper survives intact due to an extensive program of restoration, and scenes of “Monuments of Paris” remain in the northwest sector of the house, which is used, perhaps fittingly, as a music room.

The house was in Knapp family possession for over a century, hence its name today, and reflects the attempt by the Bellows to elevate (or perhaps live up to?) their name and status by building a house replete with the latest architectural details and made with the most expensive materials.  While not anywhere near the size or scale of McIntire’s masterpiece in Salem, the Knapp house seems to express a conscious desire to build a house of elegance and high style. The Knapp house is a fine example of a two-story brick Federal house, built with many of the latest details coming to the Connecticut Valley by way of Asher Benjamin’s numerous carpenter’s guidebooks.

This is the fifth in a series of profiles of significant architecture in Walpole. Many of the buildings described in this series can be found in Frontier Elegance: The Early Architecture of Walpole, New Hampshire 1750 – 1850 by Bill Ranauro.

A Grateful Exhibition of Confidence and Respect   (1797)