We're back again, this time with Roman numerals, with the next installment of the Walpole Historical Society's "Walpole Heritage Museum Comes to You" series.  Remember, we're always interested to learn what interests you - just reply to this email!

The Bemis-Howland house (1833) was built by the well-known local carpenter and craftsman Aaron Howland. The house sits at the head of the town common on Washington Square. This house provides many examples of Greek Revival detail, while maintaining certain Federal elements as well. As is the case with so many other houses in town, it’s certain that the handbooks of Asher Benjamin played a role in the details on this house.

Foreign Intelligence
FRANCE.
PARIS.
OF THE UNITED STATES OF AMERICA. 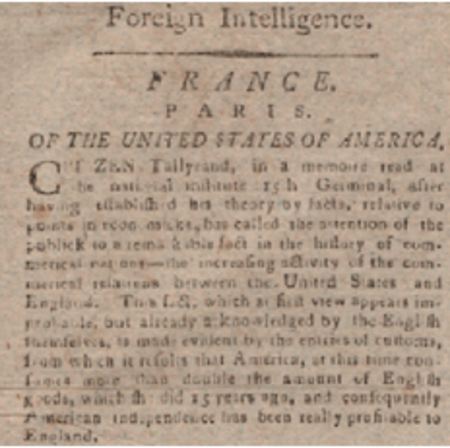 Citizen Tallyrand, in a memoire read at the national institute 15th Germinal, after having established by theory or facts, relative to points in economicks, has called the attention of the publick to a remarkable fact in the history of commerical (sic) nations – the increasing activity of commercial relations between the United States and England.  This fact, which at first view appears improbable, but already acknowledged by the English themselves, is made evident by the entries of customs, from which it results that America, at this time, consumes more than double the amount of English goods, which she did 15 years ago, and consequently American independence has been really profitable to England.
The Citizen in question – everyone was “Citizen” after the French Revolution – was Charles Maurice de Talleyrand-Périgord. He worked at the highest levels of several successive French governments, most notably as foreign minister.  Those Talleyrand served often distrusted him but, like Napoleon, found him extremely useful. After the French Revolution, the calendar was rearranged and the months given new names.  Germinal ran from March 21 to April 19, the month of “germination”.

But what about the name of that newspaper, The Farmer’s Weekly Museum?  I knew Ray Boas, Walpole’s preeminent historian, author, and publisher/editor of a newspaper of his own, would know.  Ray writes:

Thanks, Ray.  I also learned that the word itself comes from the Muses, the nine inspirational goddesses of literature, science and the several arts.   It’s not such an unusual name for a newspaper after all. 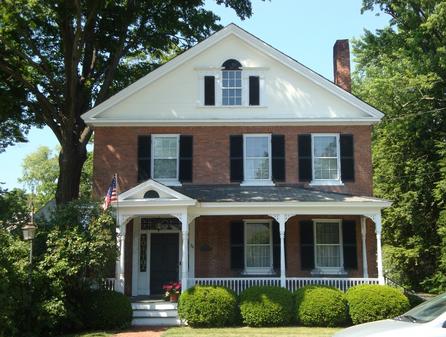 Remarkably, this house had only five owners in the first 160 years of its existence, and today continues as a private residence. Howland built the house and apparently lived in it for nine years, since it was not sold until 1842. Otis Bardwell, a well-known local who controlled all the major stage routes in the vicinity until trains took over around 1850, bought the house from Howland. Bardwell’s heirs sold to Alfred Burt in 1886, and in 1895 the house was sold to Jennie Spaulding before landing in the hands of “Mr. Walpole,” Guy Bemis in 1938. Guy spent more than fifty years in the house, until his death in 1996.

The most obvious period details are the Palladian window in the flush board pediment and the door surround, which is framed with pilasters and bull’s eye corner blocks, and topped by a fret design commonly found in Greek decoration. It’s likely this design was taken from Benjamin’s guidebooks. As is the case with most Greek Revival houses, the gable end of the house faces forward. The Victorian portico was added at a later date.

An interesting feature of the interior are the perforated heating tubes from the fireplaces.  The idea was an attempt to disperse some of the heat generated by the fireplace throughout the house. The front parlor windows, which face south, have inside folding shutters which can be used to keep out summer sun or winter winds.

It’s not surprising that this house was not only built by a master builder such as Aaron Howland but that he would live in it himself. The construction of this house shows great concern for detail from both practical as well as aesthetic considerations. It’s no wonder that Guy Bemis chose to stay so long in this house.

This is the seventh in a series of profiles of significant architecture in Walpole. Many of the buildings described in this series can be found in Frontier Elegance: The Early Architecture of Walpole, New Hampshire 1750 – 1850 by Bill Ranauro.


1797:  “English Imports Have More than Doubled since the Revolution”

This is the lead paragraph of a lengthy article in the August 14, 1797 edition of The Farmer’s Weekly Museum, a newspaper published in Walpole.  Judging from the articles in the Museum that week, there was a lively interest in foreign affairs in Walpole, especially what was happening in England and France.  The French Revolution was still in progress; ours had ended in 1783.