Log driving was strenuous and dangerous.  Work was seasonal and attracted rugged, foot-loose individuals, likened to cowboys of the West.  Men ate four meals each day and were supported by floating cook shacks.  A driver who fell after losing balance while on a moving, rolling log could be crushed between logs.  Men killed during the drive were buried on shore and their graves marked by hammering their hobnailed boots into a nearby tree.


The Main Street front, by contrast, reflects the country’s changing architectural taste. Well-spaced columns support a full Doric cornice and entablature with triglyphs. The pediment is of flush board, with a prominently centered Palladian window, and Doric pilasters are at the corners. The front doorway has side-lights and a transom above, with leaded muntins to divide the panes of glass. The first story windows are six over six with a cornice, while the second and third story windows are twelve over twelve and double hung.

The front door opens into a central hallway, which was remodeled to accommodate the new front entrance.  Paneling on the stair wall and an elaborate balustrade adorn either side of the stairway.  These are the original features of the house.  Folding shutters appear all through the house on the inside of windows and are also original.

This is the sixth in a series of profiles of significant architecture in Walpole. Many of the buildings described in this series can be found in Frontier Elegance: The Early Architecture of Walpole, New Hampshire 1750 – 1850 by Bill Ranauro.

Winter was the preferred season for logging.  Horses dragged logs over frozen ground to the banks of nearby streams.   Come spring thaws and high water, logs were floated to the Connecticut, where they joined other logs from farther upstream.  Coordinated releases were required to maintain an orderly flow of logs on the river.   It could take three months for the logs to move 200 to 300 miles down-river to chain corrals where they were collected for the mills.  Families from nearby towns gathered and picnicked on shore to watch the logs float past.  They were sometimes treated to added excitement when the logs took out a bridge.

Carried by river currents, logs moved day and night.  Men called drivers traveled with the main flow of logs, alert to both known obstacles, such as bridge piers, submerged rocks, shallows, narrows, rapids and dams, and unexpected problems that arose when logs became packed too closely and “jammed.”  It was estimated that 500 men were controlling 65 million feet of logs stretched out along 80 miles of river on the last Long Drive.

Directly across from the Walpole Academy on Main Street sits the Buffum house. This house stands out as a home of great beauty and historical significance in Walpole. On first glance, one would have to question the construction date of 1785 for this obviously Greek Revival residence.  However, the house was indeed built in the Georgian style by Ebeneezer Crehore of Milton, Massachusetts. How did a Georgian-style house built in the eighteenth century come to epitomize the Greek Revival of the nineteenth? The answer to this puzzle lies with the major alterations made to the house in the 1830s.

Although Benjamin Bellows had the house built, some debate lingers regarding who the house was actually built for.  Martha Frizzell says “There seems no reason why Bellows should have had such a house built. Did Crehore build it for himself and for some reason never receive title?”  Bellows would have been living across the street at the time in a house that no longer exists.

When the house was bought by David Carlisle in 1797, it had a hipped roof and was typically Georgian in style and detail. Following several changes in ownership between 1802 and 1820, the house was sold to William Buffum, a well-known and prosperous merchant. The former home of the Farmer’s Weekly Museum would remain in possession of the Buffum family for the next 125 years. It was under Buffum’s ownership that the house underwent major changes.  It seems likely that the Buffums were anxious to express their own status by keeping up with the latest stylistic trend, and took steps to alter the house to reflect the Greek Revival that was sweeping the town and nation by the 1830s.

The similarity of the added portico to the one on the Walpole Academy suggests that Aaron Howland was responsible for the remodeling of the Buffum house. Many details on the exterior were altered to create a house reflective of the Greek Revival, including the hipped roof that was changed to a gable roof. The original timbers in the attic are easily distinguished from the newer ones, since the originals are of oak, while those used for the alterations are of chestnut. The two-story Doric portico which faces Main Street was originally a side of the house, which was first finished in the Federal-Georgian style.

The front of the house originally faced north, onto Middle Street.  The former front door was centered in the original five bay façade, and can still be observed with its pulvinated cushion frieze, a characteristic found on Federal doorways. 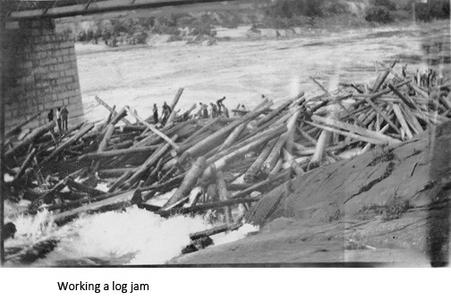 The dam and canal system at Great Fall was a known choke point and an obstacle to be dealt with.  Opened in 1802, this was the first canal system in the US, built so boat traffic could bypass the 52-foot-high Great Falls.  Drivers guided their logs through a sluice and over the dam.  Some logs ended their journey at the Bellows Falls pulp mills.

As the drive slowed to work its way past Great Falls, weary loggers took a break from their grueling work and found their way to the more than 15 bars in North Walpole.  Here they quenched their thirsts and found other diversions before continuing their journey down the river.

Little evidence of the days of log drives remains in North Walpole, which now has a diverse economy that includes manufacturing, retail, and service industries.

Material for this article was abstracted from many sources, including the New England Historical Society and WVPR. 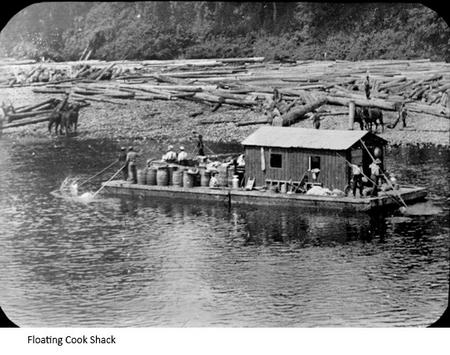 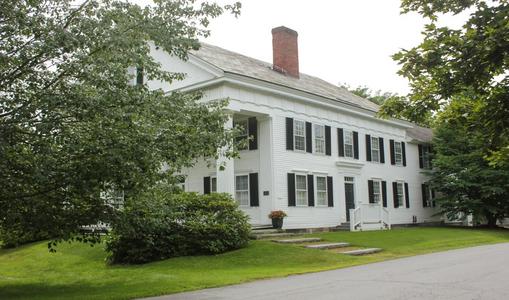 Welcome to the sixth installment of the Walpole Historical Society's "Walpole Heritage Museum Comes to You" series.  Today we start with a story of North Walpole and log drives, and continue with our tour of Walpole architecture.

North Walpole, situated on Connecticut River at the site of Great Falls and across the river from Bellows Falls, Vermont, was a busy place during the era of river log drives.  The major spring drive, called the Long Drive, took place each year from 1865 to 1915.  Pulp and saw mills at Bellows Falls and farther downstream in Massachusetts and Connecticut were the final destination for the logs.  The era of river drives ended when floating logs presented a growing danger to increasing numbers of pleasure boats using the river and railroads and highways could provide faster, cheaper, year-round transportation. 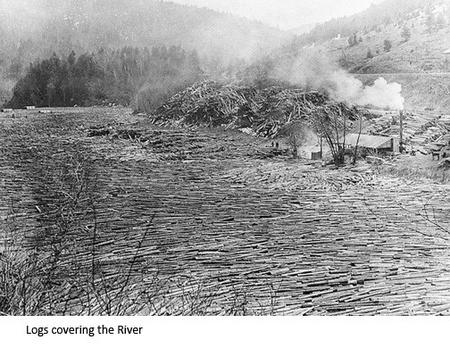