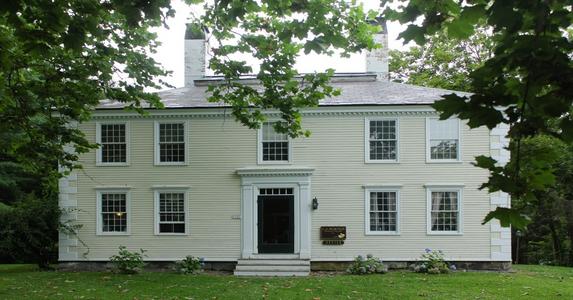 Greetings and welcome to the fourth installment of the Walpole Historical Society's "Walpole Heritage Museum Comes to You" series.  Every Wednesday we will offer a new step along an architectural tour of Walpole, as well as another story from the history of Walpole - this week from another delightful entry in a 1797 Walpole newspaper.

"Among the features that are often missing or damaged from eighteenth- or early nineteenth-century windows are interior shutters. Often mistakenly called Indian shutters, these features were not intended to defend a building against attack (for which they would have been useless) but to exclude the cold or to provide privacy in an age before window curtains were common."

The shutters found in the Tatum-Peck house are of a type known as “sliding shutters.”  Garvin also points out that the paneling profile of the shutters, like so many other design aspects of this house, is of a typically Georgian style. The shutter would be fitted to slide behind the wall to be kept out of sight when not in use, and when needed could be slid into sight across the window. The style and technique utilized would be akin to construction of a “pocket door” today.

Although there are many houses of a similar style, the Tatum house seems richer in detail than most. The exterior features corner quoining, which, though not unknown in the Federal period, was a detail more commonly seen on mid-century Georgian houses. Indeed, most of the exterior details on this house are associated with the Georgian period. The cornice eaves are substantial, with a dentil range underneath them. The windows have louvered shutters and the front door has a five light transom over it, cornice and dentil range matching that of the roof cornice. Doric pilasters flank the door as well.

While many of the characteristics and details of the house look back to the mid-eighteenth century, e.g., the double chimneys, corner quoining and central hall plan, the design, shape, and ornament reflects at least an awareness of, and desire to incorporate the newer designs of Robert Adam.  A house of this magnitude would have been appropriate for a leading member of the community, and Amasa Allen certainly fit that description. Today, the house serves as the offices for Burdick’s, a popular downtown restaurant located next to the Tatum-Peck house.

This is the fourth in a series of profiles of significant architecture in Walpole. Many of the buildings described in this series can be found in Frontier Elegance: The Early Architecture of Walpole, New Hampshire 1750 – 1850 by Bill Ranauro.

As might be expected, Amasa Allen was active in politics. He held many town offices, and from 1786 to 1791 served as the representative to the New Hampshire General Court. Later, in 1806, he served as a representative to the state legislature. His stature in town then leads us to ask what his relationship may have been to the Bellows. Apparently, Allen and Bellows felt differently about at least one important issue: ratification of the Federal Constitution. Allen was an anti-Federalist and Bellows was in support of ratification. New Hampshire historian and scholar Jere Daniel reports that a search for the town’s 1791 election records are mysteriously missing. Had Bellows fixed the voting?  We know that Allen served from 1786-91, but that it was Bellows who voted at the state ratifying convention. The truth may never be known, but it seems apparent that these two powerful individuals did not always agree.

With this kind of background, it isn’t surprising that Allen would build a substantial residence for himself. The Tatum-Peck house (1792), as it has come to be known, was indicative of the transitional state of architecture in country houses in the 1790s. The Tatum-Peck house demonstrates that country houses and their builders were not yet ready to let go of the Georgian past, yet they were flirting with details associated with the newer Federal style. The house is a two-story hipped-roof house with clapboard siding, corner quoining, and two chimneys with eight fire places. The floor plan harkens back to the more typical Georgian layout, with a two-story central-hall plan and five-bay window facade facing forward.

This house also retains interior window shutters, a rather unique feature that appeared in more substantial houses in the eighteenth century. Architectural historian James Garvin attempts to correct a long held misconception regarding the purposes of this feature:

Located on Main Street is the Tatum-Peck House. This house, owned and probably built by Amasa Allen (1752-1821), was completed in 1792.  He would live in this house until his death in 1821. Allen had come to Walpole from Pomfret, Connecticut in 1776 with little. However, he quickly established himself as a successful merchant in town, commencing business on the opposite side of Main Street, about 150 yards from where his house would one day sit.  The name of his store was “Allen and Crafts,” Joseph Crafts being a partner who came from Connecticut with him.

By 1792, Allen had established himself as a person of substance and means in Walpole.  As evidence of Allen’s elevated status in the town, only Benjamin Bellows purchased more pews in the new meetinghouse built on Prospect Hill in 1792. Allen purchased three, while five others purchased two, and thirty-five purchased one. Bellows purchased thirteen. The purchase of even one pew would have signified a high degree of wealth and status in town. Allen would leave $75,000.00 to his heirs upon his death in 1821, an enormous fortune for the day. 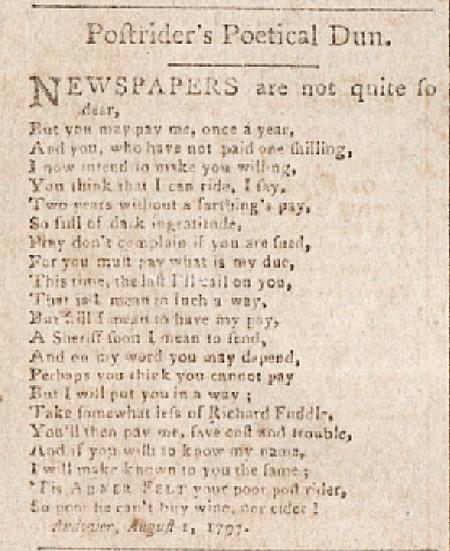 NEWSPAPERS are not quite so dear,
But you may pay me, once a year,
And you, who have not paid one shilling,
I now intend to make you willing,
You think that I can ride, I say,
Two years without a farthing's pay,
So full of dark ingratitude,
Pray don't complain if you are sued
For you must pay what is my due,
This time, the last I'll call on you,
That is I mean in such a way.
But will I mean to have my pay,
A Sheriff soon I mean to send,
And on my word you may depend,
Perhaps you think you cannot pay
But I will put you in a way;
Take somewhat less of Richard Fuddle,
You'll then pay me, save cost and trouble,
And if you wish to know my name,
I will make known to you the same;
'Tis ABNER FELT your poor post rider,
So poor he can't buy wine, nor cider!

Abner Felt lived in Andover, Vermont.  He figures as a Head of Family in the 1790 US Census and must have supported the family by being a Post Rider, as well as a farmer.  Post riders were a horse-and-rider postal delivery system. They served clients along routes known as post roads.  They collected and delivered mail over the course of their route, meeting with other riders at scheduled times and scheduled places to exchange forwarded items. In this way correspondence could pass reliably from rider to rider and cover a considerable distance in a reasonable time at reduced cost.

Mr. Felt probably passed through Walpole on his route, and he figured whoever it was that owed him money would read the Farmer's Museum.  His "poetical" approach must have attracted attention and maybe even induced a little shame in his debtor.

Does anyone have an idea who "Richard Fuddle" might be?