This pair of hand-knit woolen socks and the accompanying photo together make one of the many stories the collections of the Walpole Historical Society has to tell.

The man in the photo is Edwin Guild.  From the History of Walpole, New Hampshire (Martha Frizzell, 1963), we know he farmed sixty acres on Ramsay Hill Road, property which he bought in 1862, when he was 33 years old.  Edwin was in the organizing group of a proposed temperance committee in 1873 and was involved the 1899 Old Home Week Association, with such local worthies as Josiah G. Bellows, Thomas N. Hastings, and Dr. A.P. Richardson.  He continued to own and farm his property until his death in 1907.  The farm then became the property of Norman Guild.

From an internet search, however, we have also learned that prior to becoming a Walpole property owner and upstanding citizen, he had something of a wild past . . . .  According to the “Report of the Special Committee Appointed to Investigate the Troubles in Kansas” for the U.S. House of Representatives (1856), Edwin Guild was a member of the second spring party that went to Kansas under the auspices of the New England Emigrant Aid Company, which left Boston on March 20, 1855.  According to testimony, “These emigrants were generally armed with shot guns, rifles, Colt’s pistols, and bowie knives.”  The purpose of these emigrants?  Most likely, to go to the Kansas territory and by settling, voting, or “otherwise” to ensure that Kansas would enter the Union (which it did in 1861) as a “free state.”  Remember, Edwin was back in Walpole buying his property in 1862. 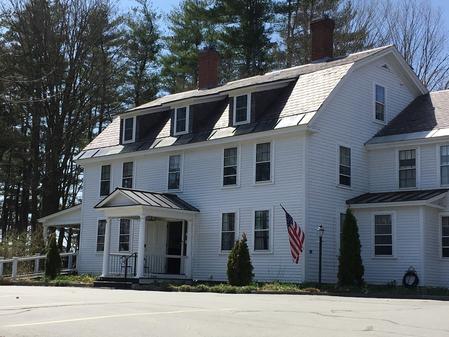 Greetings and welcome to the next installment of the Walpole Historical Society's "Walpole Heritage Museum Comes to You" series.  Every Wednesday we will offer a new step along an architectural tour of Walpole, as well as another story from the history of Walpole.

From the earliest period of Walpole’s existence, several houses of note survive, having stood for more than 265 years. The largest and perhaps most notable building from this early period was constructed by the town’s grantee, Colonel Benjamin Bellows. Bellows built what was likely the grandest and most substantial house to be found for many miles around. He had waited almost ten years from the town’s founding to build this house, likely because of the threat of Indians in the region. It was not until this threat had abated following the end of the French and Indian War in 1761 that it was safe to proceed with building outside the fort they had been living in prior to this time.

Walpole was essentially the wilderness in the 1760s, so a house of ample size and stature would have been rare in the upper Connecticut Valley in this period. It seems clear that, by constructing this house, Bellows was making a statement about his leading place in the town. Though lacking many of the finer details found on mid-eighteenth-century Georgian structures, the house possesses two and one-half stories, a symmetrical façade with centered door, a five-bay window arrangement, and a gambrel roof with dormers. These were all features typical of colonial houses of substance built after about 1750. The Bellows Homestead (1762) is an excellent example of a mid-eighteenth century Georgian style country house. The house stands today as the Bellows-Walpole Inn.

This is the second in a series of profiles of significant architecture in Walpole. Many of the buildings described in this series can be found in Frontier Elegance: The Early Architecture of Walpole, New Hampshire 1750 – 1850 by Bill Ranauro.

The Life and Socks of Edwin Guild